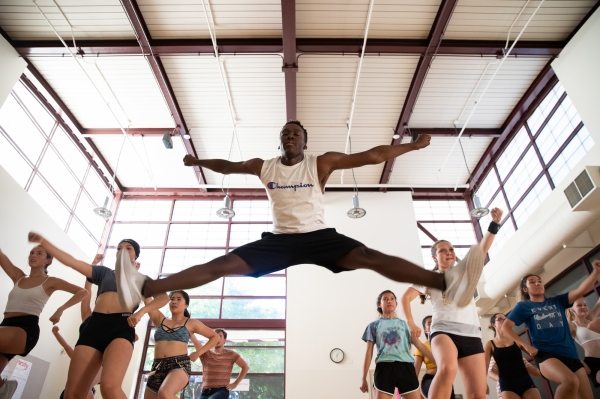 Freddie Wynn, a senior at Menlo-Atherton High School, does the splits midair during cheerleading practice. Photo by Magali Gauthier/The Almanac 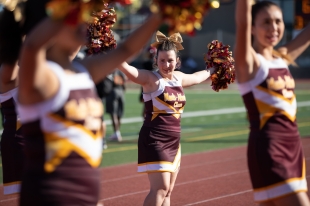 Skyler Von Lowen shouts, along with the rest of her cheerleading team, “M-A, let me hear you say, M-A!” during a team practice in her high school’s dance room on a Wednesday afternoon.

Skyler, a 14-year-old freshman, is doing something special at Menlo-Atherton High School this school year. She’s one of the first special-needs students — a person with physical, emotional, behavioral or learning disability or impairment that causes an individual to require additional or specialized services or accommodations — to be a cheerleader at the school since Varsity Cheerleading Coach Nona Ybarra joined the school’s athletic department 16 years ago.

For Ybarra, good spirit is something the school’s junior varsity and varsity cheerleading teams need at every game.

“She (Skyler) brought an element of just happiness and good spirit, that it was just something I wouldn’t pass up just because she had special needs,” Ybarra said. “If the person can make me smile, I know they can make other people smile.”

Skyler has mild intellectual and physical disabilities because she was born with a chromosomal abnormality: Distal 8p deletion, said her mother Sandra Von Lowen.

And soon after Skyler joined the cheerleading team, another special-needs student gave it a shot. M-A junior Angelina Mandujano Gonzalez, 16, who is deaf, decided to try out for the squad at the last minute because she was missing a few physical education credits.

“I also wanted to try something new and prove to people in general that any deaf person CAN DO IT/do anything,” Angelina, who recently joined the junior varsity cheerleading team, explained in an email. “They are capable of becoming a cheerleader for ANY sports.”

The school accommodates Angelina’s disability by providing two sign language interpreters at every cheerleading practice and at games, she said.

“They (the other cheerleaders) are all aware that I am deaf and are comfortable around me,” she said. “Some girls were willing to learn a few signs to communicate or learn for fun.”

Nationwide, the inclusion of students with disabilities in school athletic programs is becoming more widespread.

Some high schools offer a Special Olympics program called Unified Sports, which unlike traditional high school athletic teams combines students with special needs with those without intellectual disabilities on sports teams. About 260,000 students participated in the program in 2018, an increase of 16% from the previous year, according to Unified Sports. The program helps foster meaningful interactions between students and helps special-needs students feel recognized as contributors, according to program organizers.

The Americans with Disabilities Act (ADA) requires schools to provide “reasonable accommodations” for an individual who can establish that he has a disability and that he is “otherwise qualified” to participate in the sport or activity in question. The law defines a disability as a “physical or mental impairment limiting one or more major life activities.”

At M-A, Ybarra’s kind and inclusive nature has helped shape the junior varsity and varsity cheerleading teams to be welcoming to everyone, Von Lowen said. This coincides with the school’s “strength in diversity” motto, she noted.

“I have always gone out of my way to make everyone feel welcomed,” Ybarra said in an email. “I think high school could be so brutal at times and it doesn’t need to be. If I can create an environment that uplifts, and connect students in a positive way, then I AM ALL IN! That is what cheerleading is all about, spreading cheer!”

The team also includes two male students. During Ybarra’s time at M-A, there have been six male cheerleaders at the school. Just 11.4% of high school cheerleaders in the United States are male, according to a 2019 Sport & Fitness Industry Association sports participation report.

Freddie Wynn, 17, is one of those six male students. Freddie, who enjoys choreography and dance, joined the M-A varsity cheerleading team this school year. He said he has wanted to try out for cheerleading since he was a freshman, but feared judgment and “hate” from his peers.

“Being a new gay kid, I thought people would make fun of me,” said Freddie, who finally went out for the team his senior year, realizing it was his last chance. “I’m actually enjoying it a lot. My teammates are very supportive and caring.”

Although students at M-A tend to stay within their own social circles, extracurricular activities bring people from different social circles together, Freddie said.

“We (at M-A) pride ourselves in the strength our diverse student body, representing 37 different home languages, brings to the M-A Community,” said Principal Simone Rick-Kennel in an email. “Our unique diversity is represented in athletics and extracurricular activities. Our instructional program is and always has been a work in progress to make sure all of our students have access to the highest academic rigor with appropriate support as needed.”

Freddie had some initial nervousness before games, especially a performance during an M-A football game at Levi’s Stadium in Santa Clara. Strong support from his friends and family who attended eased those nerves. He’s received compliments from classmates who have seen him perform.

“It’s (cheerleading) helping me express myself even further,” he said. “I liked being who I was, but it’s helping me get out there even more.”

At M-A, Skyler mostly interacts with students in her special-needs class, so extracurricular activities (Skyler also participates in choir) are a way for her to branch out, her mom said. Although Skyler doesn’t participate in cheerleading stunts, such as building pyramids and memorizing a sequence of movements, she takes part in chants as a sideline cheerleader, Von Lowen explained.

“It’s a great way for her to make a group of friends and not just in her special-needs class,” Von Lowen said. “Aside from choir, everything else she does is kind of isolated to one area.”

Skyler was a cheerleader and performed in the school’s production of “Mary Poppins” as a student at Hillview Middle School.

Von Lowen said other special-needs students who enjoy performing are also coming up through Hillview, and may be inspired by Skyler and try out for cheerleading at M-A.

“We hope to inspire other kids to try,” Von Lowen said. “All we did was ask.”

To students who are afraid they might not fit into the mold of a particular role like a cheerleader, Freddie said: “Be confident in what you’re doing. If it’s something you love, who cares?”