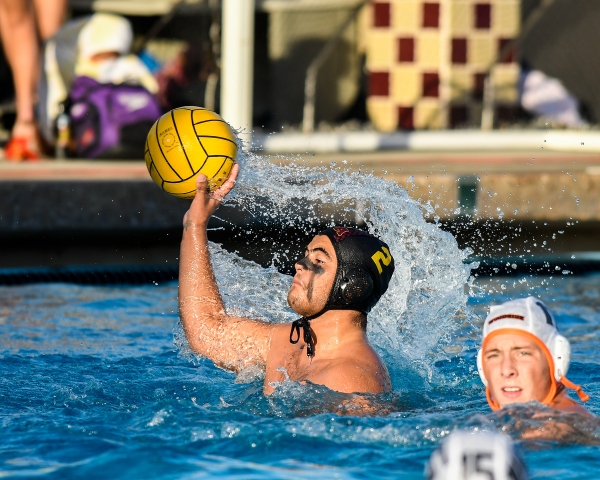 Gabe Montoya came up with a key steal in the final 10 seconds of regulation. Photo by Bob Dahlberg/@bobd_photo . 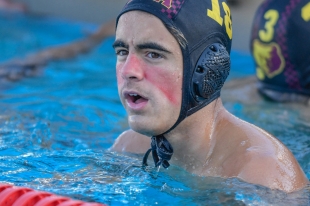 Julian Montoya was the man of the hour. Photo by Bob Dahlberg, @bobd_photo .

Menlo-Atherton senior co-captain Willem Holzrichter thought the game was over. Mitty had the ball with 10 seconds left to play in regulation and a one-goal lead. One pass and the horn would sound, ending the Central Coast Section Division I boys water polo match at Independence High in San Jose.

“When they scored my heart sank,” Holzrichter said. “Ten seconds left, the odds we’d get the ball back were low.”

The sixth-seeded Bears did get the ball back. Gabe Montoya took advantage of a sloppy pass, made the steal and immediately got the ball to the center of the pool, where Michael Heller kicked up a swell of whitewater fighting to gain possession of the ball and then in one motion, rose out of the middle of the wave and slammed in the tying goal with one second remaining to play in regulation.

M-A still needed a couple of miracles to complete an unlikely 15-14 sudden death victory over the Monarchs on Saturday for the Bears (15-12) first CCS title in 12 years and their first appearance in a title match since losing to Bellarmine in 2016.

“That was my freshman year and we lost badly (12-2) to Bellarmine,” Bears co-captain Zach de Haaff said. “We knew we had to get back. We lost to Palo Alto in last year’s first round. It was about adjusting. We had the components this year. We just needed to fit it all together.”

M-A is playing its best water polo at the right time. After losing to Woodside twice during the regular season, the Bears came back to beat Palo Alto and the Wildcats to reach the title game.

The Bears’ continue their season in the Northern California tournament as the No. 7 seed in Division II and will travel to play at No. 2 Jesuit (13-17) in Carmichael on Tuesday.

“We always thought we had a strong possibility of getting here,” Holzrichter said. “We had a good group of starters and an even better group of bench players and we were always ready to support each other and the team. We never doubted it was possible.”

Without Menlo School in the Peninsula Athletic League Bay Division (the Knights joined the West Catholic Athletic League and finished second in the league tournament), the race was thrown wide open. Woodside and M-A clearly showed they were the class of the league.

“There needed to be some growth,” Kates said. “The goalie (Jake Taylor) needed to play. With Willem and Zach in the mix, we knew we would be pretty good, better than last year.”

It all came together against No. 4 Mitty. The Bears scored the first five goals of the contest but the Monarchs (12-17) chipped away and took the lead the 11-10. Sonny Watkins scored to tie at 11 but Mitty regained the lead with 50 seconds left in regulation, setting up the wild sequence of events at the end of regulation.

Mitty took a 14-13 edge on a penalty shot with 1:50 left in the second overtime. After a point blank save from Taylor, who had 13 saves on the day, de Haaff scored to even things.

Taylor’s save with 17 seconds left meant the game went into sudden death. Mitty had the first possession. M-A held and went on the attack.

de Haaff took the ball at two meters and set himself to shoot.

“I knew I had to get off a good shot,” he said. “I knew the goalie had trouble going low so I skipped it. It was a perfect shot. Most of the time I make that shot.”

This was one of those exceptions and the ball skipped up and rebounded toward the left, exactly where Julian Montoya was positioned. Somehow he had the inside position on his defender and the ball landed in the palm. The freshman had the poise and awareness to take the shot with only the slightest hint of hesitation and before the goalie could recover.

“With a rebound I am always hopeful,” Holzrichter said. “There’s an art to missing well.”