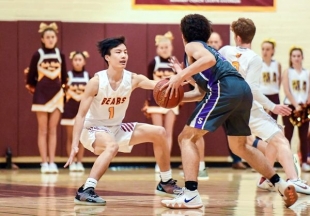 To say Menlo-Atherton coach Mike Molieri was concerned after watching his team get blitzed for 80-plus points in two consecutive games would be a clear understatement. Molieri has built his program’s identity on defense, on shutting down opposing offenses. Regardless of who the Bears were playing, in Molieri’s view there’s no way they should be giving up 80 points in a game.

So it was a welcome sight Saturday when M-A made a return to defensive normality with a 60-39 win over Sacred Heart Prep in a matchup of Atherton rivals. In Molierio’s mind it was a return to the way things should be, holding a good team under 40.

“I can be harsh,’’ Molieri said. “I hold these guys to a high level. They showed up tonight. Our defensive mindset was a lot better.’’

M-A (4-2) was coming off an 80-54 loss to Bellarmine and an 85-49 whuppin’ at the hands of Mitty its last two times out on the court. Those two teams are a combined 12-0, so no shame in that regard. They might be the two best teams in the CCS this season. But M-A advanced to the Central Coast Section Open Division semifinals a year ago, so it made sense to play teams of that caliber early in the season. However as the results bear out, M-A was not quite ready for that level of competition.

“We have nine guys who have never played at the varsity level,’’ Molieri said. “But those games are going to make us better.’’

Sacred Heart Prep went into Saturday’s game 5-1 with its only loss by a 68-65 count to a highly-regarded St. Patrick’s-St. Vincent team. But this one was a mismatch from the outset. SHP committed 13 first-quarter turnovers.

“You can’t beat a good team on their home court and turn it over like we did,’’ SHP coach Tony Martinelli said. “We had more turnovers than attempted shots. Credit to M-A. They hadn’t played as well as they’re capable of and we got them right.’’

The Bears led 15-6 after one quarter and then got hot in the second quarter, hitting their first six shots, four of those 3-pointers, and blew the game open with a 33-14 lead at halftime.