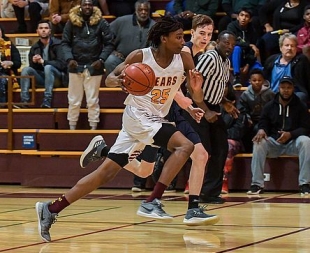 Skyler Thomas was big on the boards for the Bears. Photo by Bob Dahlberg.

For three quarters Menlo School appeared to be in control. But in the fourth quarter Menlo-Atherton turned up the aggression on its press and rallied for a 57-54 victory in the battle of the Menlos at M-A.

Menlo School (7-3) hit four 3-pointers in the first quarter and led 18-10 at the end of the quarter. The Knights extended their lead to as many as 11 on three occasions in the third quarter.

A’Marion McCoy started the run with a basket as the third quarter came to an end. Then as the fourth quarter began it was J.D. Carson with a hoop, Justin Anderson off a steal and Trevor Wargo off another steal.

Menlo’s Miles Hester broke the press for a layup to end the M-A run and give Menlo a 48-43 lead. But that was a momentary reprieve as the Bears ran off 10 unanswered points. Carson made a 3-pointer off an offensive rebound by Skyler Thomas and Nick Tripaldi hit a 3 to give M-A the lead at 49-48 with 1:46 left.

“Ice in his veins,’’ Molieri said of Tripaldi, who finished with a team-high 16 points.

Anderson scored off a steal and then scored again on the fastbreak and roles were reversed with M-A up 53-48. A slam by Thomas and two free throws by Tripaldi made it 57-51 before Menlo’s Cole Kastner made a 3-pointer with 14 seconds left. The Knights forced a turnover and got up two potential game-tying 3-point attempts in the final seconds that missed the mark.

“Once we had a lead we didn’t know how to take care of it,’’ Menlo coach Keith Larsen said. “We have to be stronger with the ball.’’

Anderson, headed to Washington State on a football scholarship as a defensive back, showed he can guard opponents on the hardwood as well. He scored 12 points with four of his six field goals coming off steals.

“In the big picture of things we’ve played well,’’ Larsen said. “We’ve had a good preseason with seven wins against pretty good teams. I think we’re an Open Division team, but we’ve got to get a lot better. We played young tonight, but it’s all about league now.’’

M-A has a non-league game with another local rival at Palo Alto on Saturday at 6 p.m. before opening Peninsula Athletic League South Division play at Mills on Wednesday.

Varsity Softball vs. California School For The Deaf