M-A girls ‘Kraft’ a PAL soccer victory over the Tigers

Woodside tops Aragon to stay atop the PAL Bay Division 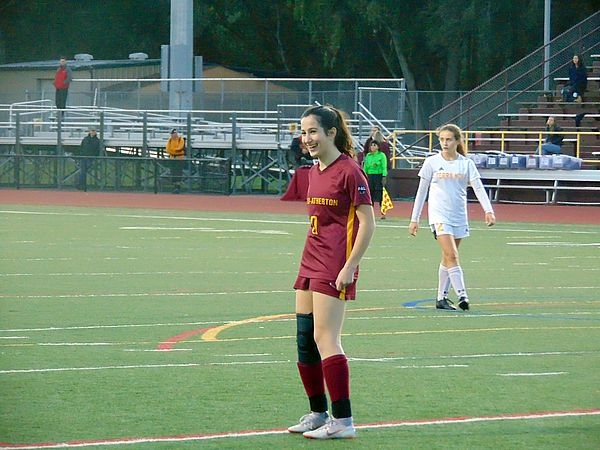 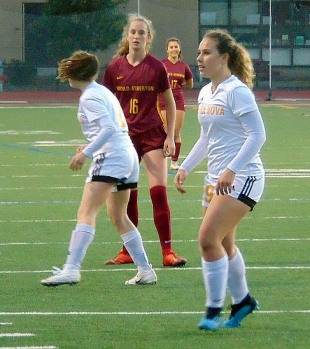 Lexi Quinn (16) had a nice shot on goal that just missed.

After undergoing a massive overhaul, the Menlo-Atherton girls soccer team appears headed in the right direction after some early-season bumps.

“Last year we had 14 seniors so we’re a very new, very young team and at first it was hard to connect,” Bears junior co-captain Peyton Karp said. “Now that we’ve played together a while, we’re connecting more and more. We’re getting a better sense of how each other plays.”

That showed Tuesday as Menlo-Atherton (4-4-3, 3-1-1) possessed the ball over 75% of the time, with Karp and fellow defenders Tyler Moss, Juliet Dineen and Sara Chiang, among others, never letting Terra Nova mount any kind of attack.

Junior Alex Kraft scored an unassisted goal early in the game and the Bears beat visiting Terra Nova 1-0 in a Peninsula Athletic League Bay Division contest. M-A won back-to-back games for the first time this season, setting up a showdown with Woodside on Thursday.

The Wildcats (8-1-1, 4-0-1) scored twice in the second half to rally past host Aragon 3-2 on Tuesday to remain unbeaten and in first place in league action.

“We’ll have to have one of our best games of the year,” M-A coach Jason Luce said. “Woodside is solid.”

The Wildcats have won four straight and are unbeaten in their past five. Their lone loss was to defending Central Coast Section Open Division champion Mitty. They also tied Sequoia and beat Leland, which reached the semifinals of last year’s Open Division.

M-A also qualified for the Open Division despite a 7-8-4 record. The Bears were seeded seventh and lost to Leland in the first round.

“This is a tough league,” Luce said. “Every team can play well. We’re hoping to be close to the top at the halfway mark.”

Thursday’s 4:30 p.m. home match against the Wildcats concludes the first round of PAL play. The Wildcats are a game ahead of the Bears at the top. Carlmont and Sequoia are right behind and Burlingame is good enough to make noise after three ties and a pair of one-goal losses during the first round of play.

Against Terra Nova, the Bears maintained an attack on the net and forced the Tigers goalkeeper to make eight saves in the second half alone.

“We have to be able to finish our chances,” Karp said. “Woodside is going to be a tough game for us.”

Karp was among those who had quality chances to extend the score, along with Sam Cotto, Kari Trail, Kate Trevor, Judy Demirkol and Lexi Quinn.

Karp and Trail seemed most in sync passing along the sidelines and freshman Fabiana Bolanos did a good job of centering the ball.

In other games Thursday, Aragon travels to Burlingame for a 4:30 p.m. game and Carlmont hosts Sequoia at 6 p.m.