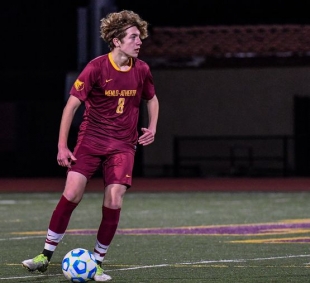 Cyprien Boustiha made big plays on defense for M-A. Photo by Bob Dahlberg/@bobd_photo.

The Menlo-Atherton boys soccer team thinks it’s good enough for the Open Division in the Central Coast Section playoffs that will start later this month. Thanks to a cohesive effort, the Bears are playing like it.

Miguel Tostado scored twice, Will Demirkol had a goal and an assist and Menlo-Atherton beat visiting Sequoia 4-2 on Monday to take over sole possession of first place in the competitive Peninsula Athletic League Bay Division.

“Even in the games we lost I felt like we played better,” M-A coach Leo Krupnik said. “It’s all a matter of finishing our chances and concentrating on playing simply.”

The Bears are 7-1-1 since dropping the league opener against Carlmont and Monday’s win was payback for the only other loss. M-A opened the season 0-3-3 and the Bears have since played lights out.

With players like Tostado, Cole Trigg, Noah Shalowitz, Emmanuel Preciado, who had an assist, helping in transition, M-A moves the ball beautifully around the field and controlled the pace for most of the contest.

The defensive line of Cyprien Boustiha, Tiziano Bolanos and Shaun Dunlevie in front of goalie Hunter Wright didn’t give Sequoia much space to maneuver. The Ravens (9-6-1, 4-5-1) did manage to punch a couple of holes in the defense but only scored when they were down by two or more goals.

“When we work hard, I’d say we’re the best in the league,” Demirkol said. “We’re technically sound and can play the ball around aggressively.”

Demirkol had a couple of strong scoring chances in the first 13 minutes of the contest before connecting off a pass from Preciado. Tostado sent a through ball that started the sequence.

Sequoia had a series of opportunities near the end of the first half, many thwarted by the defenders.

A handball, talked over by the referees to make certain, was called against the Ravens in the penalty box and Garibay stepped to convert it for a 2-0 lead in the 52nd minute.

Sequoia scored on a shot from about 20 yards out, a low liner off the foot of Erik Espinoza that short-hopped Wright, who got a hand on it before it twisted away and took an uncanny turn into the net.

Tostado scored twice within a three-minute span to put the Bears in control. Sequoia scored its final goal after Wright came out of the game.

“If we can keep winning we can play in the Open Division,” Demirkol said. “We just need to keep talking to each other, keep communicating.”

M-A travels to play Hillsdale and Carlmont goes to Aragon for 4:30 p.m. games on Wednesday.

David Ruiz scored an unassisted goal early in the contest and the Wildcats (8-7-2, 7-4-2) made it stand up with a solid defensive effort helped by senior co-captain Grant Boyd and junior defender Cole Preston.

Woodside hosts Capuchino at 4:30 p.m. Friday in its final home game of the regular season. The Wildcats are currently in a third-place tie. Capuchino is in second place.