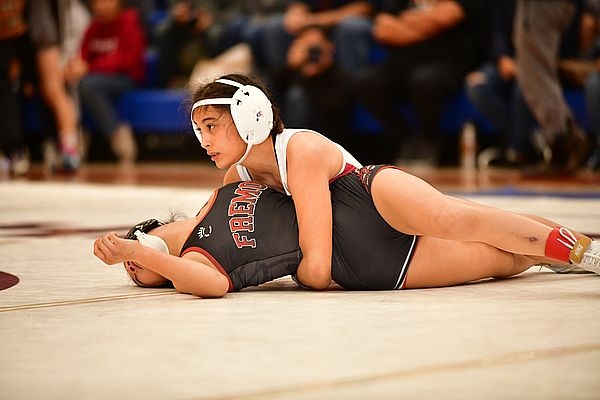 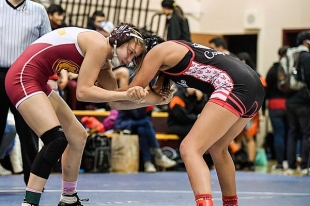 It was senior Anna Smith, who fell 6-3 in the championship match at 131 to Santa Cruz’s Maya Letona, who clinched Menlo-Atherton’s fourth consecutive CCS team title.

M-A’s Ale’Jha Broussard added a fourth-place finish and Alex Lujan placed fifth. The top four placers in each weight class advance to the state meet that begins Thursday at 9 a.m. at the Mechanics Bank Arena in Bakersfield.

The Bears were a much younger team this season and winning a section title was hardly a foregone conclusion.

If someone told Bensoussan at the beginning of the season that she would win a CCS title, she would “think they were crazy. No way!”

With Smith the lone returning CCS placer from M-A, the team appeared ready to relinquish its crown to Gilroy, which placed second with 160 1/2 points to M-A’s 162. Half Moon Bay, M-A’s top rival in the Peninsula Athletic League, was third.

“It’s so amazing after losing all our seniors from last year to come back and pull it off, I’m so proud of this team,” Smith said.

She’s particularly proud of Bensoussan, whom she took under her wing this season and who pinned her opponent in the third period at 121.

“Anna has been a big mentor for me,” Bensoussan said. “She stayed after practice and worked with me to improve. I wanted to do better conditioning and work after practice. As the season progressed, I stayed in the zone.”

While the seniors set the tone last year, it took everyone on the team to keep it going this year, resulting in success.

“The team dynamic was so important to the seniors last year,” Benssoussan said. “We really worked to keep that this year. It’s so amazing, even with new wrestlers.”

Tabaldo, who also won in a pin at 101, is no ordinary freshman. She began wrestling in the third or fourth grade, emulating older brother Royal Tabaldo, now a freshman wrestling at Menlo College, who won the Cascade Collegiate Conference title on Saturday.

Tabaldo has worked out with Menlo team members over the summer and works with the U.S. national team coach as she develops into an international wrestler.

“I expected to make it to the finals and see how far I got from there,” Tabaldo said. “I stayed calm. I knew I was down on points and I waited until the right moment.”