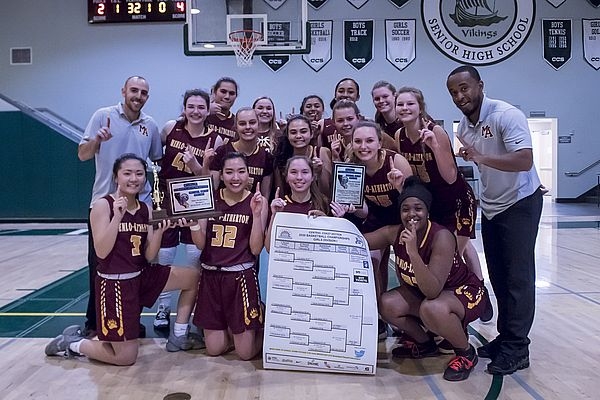 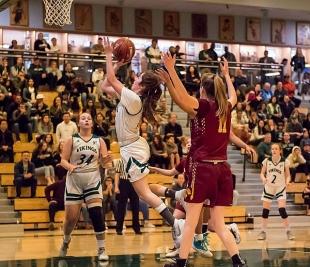 Elif Turgut scores for Palo Alto with The Enache looking on. Photo by Jenna Hickey.

Down and seemingly out of it after three quarters of frustrating offensive inefficiency, the Menlo-Atherton girls basketball team caught fire in the fourth quarter and pulled off a comeback for the ages, defeating No. 1 seed Palo Alto 34-32 for the Central Coast Section Division I championship.

The Bears trailed 29-15 late in the third quarter, then proceeded to outscore Paly 19-3 the rest of the way.

Talk about unlikely, with the score 31-31 and the clock ticking down in the final seconds, M-A’s Alyssa Faberowski, who hadn’t scored all game, drilled a 3-pointer with 3.3 seconds left to put No. 3 seed M-A on top.

Palo Alto was in desperate straits, but incredibly a Palo Alto player was fouled attempting a desperation shot from just past the midcourt line with 0.2 seconds left, and went to the foul line for three shots with a chance to tie. But the first shot missed, the second went in and the third was intentionally missed as time ran out.

Faberowski was asked about her mindset before taking that game-winning 3-pointer.

“I was just trying to hit that shot and get a win for my team,’’ she said.

Did she think she could make it?

The M-A run started with a basket by Malia Latu as the third quarter concluded. The Bears were an ice-cold 7 of 42 shooting through three quarters and missed their first four shots of the fourth quarter. But then point guard Catherine Chai hit a 3, and the switch was flipped.

Latu scored on a baseline drive, Linnea Lindblom knocked down a 3, Nicollette Yeh scored on a drive and Latu on another drive to bring the Bears even at 29-29.

Palo Alto’s Elif Turgut took an inbounds pass from Kaella Peters under the basket and laid it in to end the M-A run and put Paly back ahead. But Lindblom scored in the lane to tie and after a Paly turnover Faberowski hit her big shot.

Palo Alto managed only three points in the fourth quarter.

“The girls played their hearts out and held them to 34,’’ Palo Alto coach Scott Peters said. “That should’ve been good enough to win. I should’ve done a better job of getting us a couple more.’’

It was the first CCS girls basketball championship for M-A since 1992.

“It’s awesome for the girls, I’m so excited for them,’’ first-year coach Steve Yob said. “They’re just a great group of girls.’’